At the start of lent our family sat down and talked about this season of Lent and what it would look like for our family to step into that.  With now our youngest bumping up against 7 years their understanding and participation has awoken.

One thing we do as a family is have a visual around the house. Not only is it FUN, but it’s an important way to help our children learn.  I ordered this last year to use over the Christmas Season and it also can be used for Lent.  It’s called the Cradle to the Cross Wreath and you can order it HERE.

We began asking each person in our family to ask God what is something that they could give up for 40 days as a symbol of remembering what HE gave up for US.  And the bigger question to the kids was… “What is something that might be a part of your life that you might be depending on a little too much?  And what would it look like if you decided to not have that be so much of your life right now?  What would those things be?

And so A FAMILY JOURNEY OF LENT began…..

Dave is giving up Soft Drinks.  If you know Dave, you would have heard the gasps in the room by all three kids.  This is NOT something that will be easy for him.  But what I realized is it set the tone for all of us to really press into what it was that God was saying to all of us.

Emma (our 11 year old) went next.  Emma is giving up “unorganization.”  She’s one of my children that did not inherit the desire for things to be neat and orderly.  Which is great and we love that about her.  As she listened to His voice she said she needed to step into the discipline of making space orderly around her.  That would mean how she approached her work and space at school and also her space at home.  As her orderly mom, this was wonderful news to my ears.  But also realized this would be a big task for her to take on.

Izzie (our 7 year old) followed. Now this might not seem like something to most of you but for her it was straight from her heart.  Lately she has been obsessed with Beanie Boo’s.  I’ve never seen a kid attach to something like this.  She loves stuffed animals.  Whenever Dave returns from trips he always brings her back a small stuffed animal.  I personally think it’s crazy to bring home stuffed animals but to her it’s this massive act of love and affection.  She said she is giving up the desire to want more Beanie Boo’s.  The need to want to keep getting more.  And for her this will be something hard for her to step into for sure. 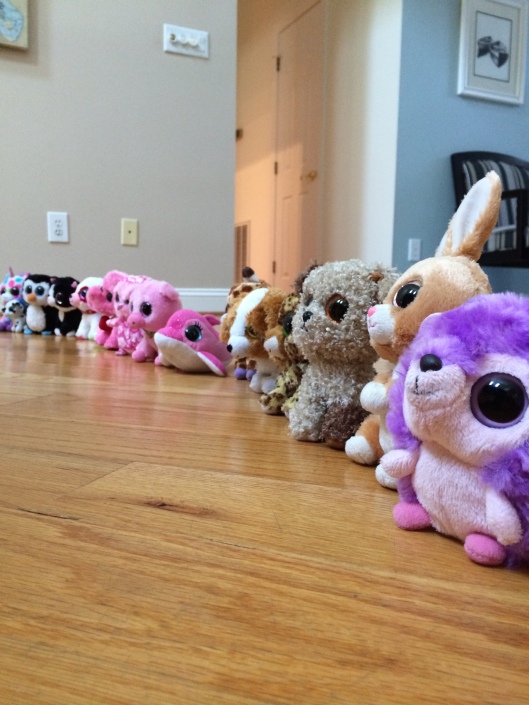 Then I went.  Feeling like I needed to follow Dave’s lead I told the family I was going to give up coffee.  I’m not sure if I can actually do this.  But it’s something I drink 1 cup of every single morning that gets my day started.  To be honest I’ve not really pressed into what this would look like and wasn’t really sure if this was what I was to do but in the moment it sounded like this was where I needed to press into. (See update below for the reality of what happened)

And then Frankie (our 6 year old) – Sweet Frankie.  He immediately said he’s giving up playing the Wii. Everyone immediately started to give him other idea’s that might be more atainable.  This boy LOVES the Wii.  He works his day around having some access to it.  If we step into discipline many times it’s time taken away from the Wii that works for him.  So this was HUGE for him.  But as we suggested other smaller options for him, he was very annoyed and said, “No.  I want to do the Wii.  So we honored his heart and affirmed his decision.

I think for all of us it was such a good family exercise to discuss and do together.  To be able to hear each others hearts and to know places in our lives that we have become dependent on other things.  I’m thankful that Lent lead us into this and want to engage in this conversation more often as we journey in these conversations as family.

So the beginning of lent was a while ago..  Here is our update on HOW we have been doing:

Once again, our children have blown me away.  After hurdles of deciding if a Sonic Limeaid is a soft drink, and day 2 of having to drink a cup of black coffee in the morning just to get by I was especially reminded of the discipline it takes to go without. Dave continues his commitment to avoid soft drinks.  I on the other hand realized very quickly that cutting caffeine to start the morning would not be something attainable cold turkey.  Since I’ve decided to give up sweets and still press into the Kairos of the dependence on a cup of coffee each day.

The girls are pressing through.  I love opening the door to Emma’s room and seeing things in order and know she’s going after it.  And NOT hearing about Beanie Boo’s day in and day out has been pleasant change as well around here.

BUT THE BIGGEST JOY HAS BEEN WATCHING OUR SON….

To our Son Frankie who I thought would in no way be able to be without the Wii.  Each day he has come into our home as if it has never even exhisted. I am utterly in shock and awe at him.  He is showing all of us in this family what little Faith we had in him. He is showing us all how to sacrifice without complaining, without asking.  And truly teaching us when you hear from God and actually walk in Faith and Obedience that anything is possible.

So the question leads us all to ponder…  Regardless of if you step into lent or not, what are things in your life that you may be becoming a little too dependent upon?  And do you trust HIM enough to listen to HIS voice and step into releasing some of those things? Let Frankie encourage you today. By taking time to Listen to HIS VOICE and Obeying it… ANYTHING IS POSSIBLE… Right Frankie?